As I’ve mentioned elsewhere, one of the first questions any vegan has to repeatedly endure from the uninitiated is, “But where do you get your protein?”

There are plenty of ways to answer that question (opt-in to my email newsletter and check out my free guide for more info).

One of the many answers is this: seitan. Also known as “wheat meat,” it’s a relatively simple recipe of soy sauce, vegetable broth, vital wheat gluten (available on the baking aisle at Whole Foods and many other supermarkets) and optional seasonings to give it an umami or “meaty” flavor. You can also buy seitan ready-to-use at places like Whole Foods, but it’s much more economical to make it yourself and refrigerate or freeze whatever you don’t need to use right away. If you have any favorite recipes involving meat that you don’t want to miss out on, see how you can replace them with seitan. Chances are, the end result will be lower in fat and quicker and easier to prepare! (And none of the risk of cross-contamination, since seitan is also a plant food!)

Benefits of seitan for vegan runners

Easier to digest. This will both speed up absorption and make your Saturday morning runs much easier!

So here’s how you make it:

In a 6 or 8 quart stock pot, place all the broth ingredients (except the 3/4 cup of broth to be used in the seitan mixture) and raise heat to a simmer. 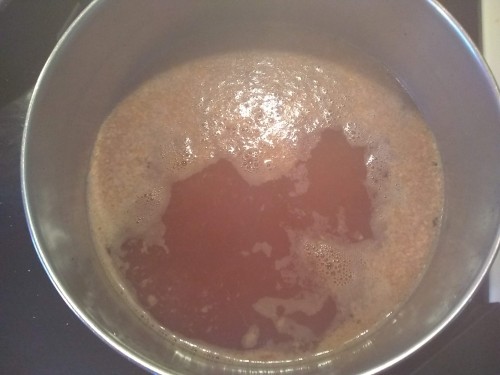 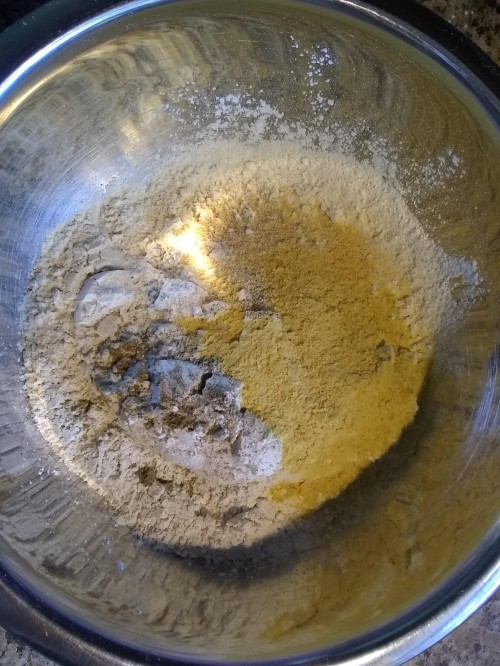 Using a metal or plastic spoon, stir in the soy sauce and vegetable broth and stir until it becomes too thick for stirring. Finish combining by kneading with your hands until it looks like this:

Leave it alone in the bowl for 15 minutes. (Vegetable broth for simmering can also be prepared during this time.) After 15 minutes, flip the dough over and knead it for another 20-30 seconds. Tear into four large sections (it will be fairly resistant already, like thick chewing gum) as shown below. 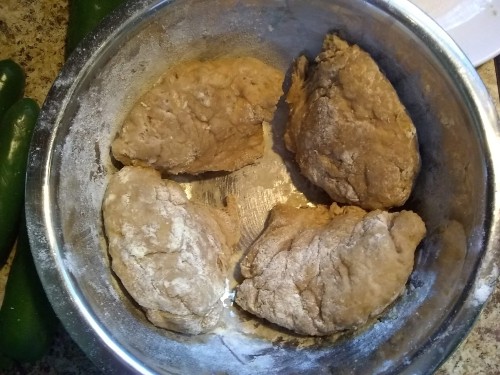 Drop the four sections into the simmering broth one at a time, being careful not to let them overlap. They will drop to the bottom immediately.

Simmer, loosely covered, about 30 minutes. By now, they will have puffed up from absorbing some of the broth and floated to the surface. Flip them using a set of tongs or a large fork, loosely cover and cook another 8-10 minutes. 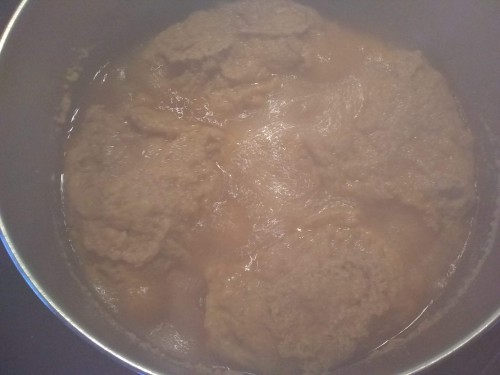 Using a set of tongs or a large fork, transfer the cooked sections of seitan to a heatproof plate to cool for 5-10 minutes. 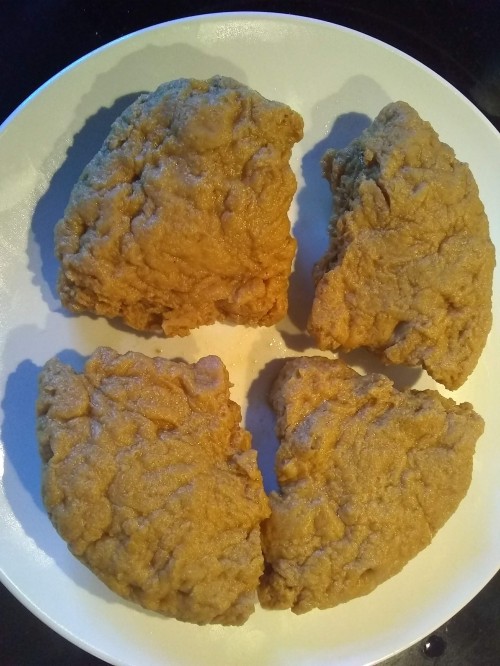 Once the sections have cooled, you can either cut them into 1/2-inch slabs (as shown) or use or refrigerate them as they are.

Save the leftover broth for another use. 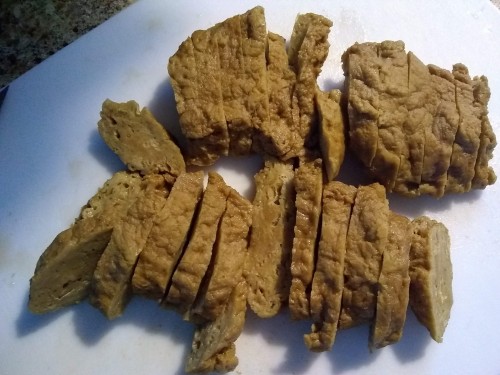 If the end result seems more “squishy” than thick and meaty, then plan to cook the pieces for the recipe of your choice in a dry pan once they have cooled.

This recipe is even more economical if you make your own vegetable broth using frozen veggie peels and scraps, since one large package of Bob’s Red Mill VWG is good for 3-4 batches of seitan.