This post is just what the title suggests: my story, followed by the recommendations that I followed and which led to the story’s happy ending. Enjoy!

When I first started running competitively in 2005, a few age-group wins at 5K races spurred me on to try longer distances: 10K, 8 miles…

I built up so quick that I ended up running my first competitive half-marathon and my first full marathon just two months apart, and both of these were less than two years after winning that very first age-group award, which, at age 29, was also my very first athletic award. (Raise your hand with me if all you did in school was wear the gym uniform to keep from flunking PE!)

That very first marathon was also a Boston qualifier!

The age-group wins kept coming, and I kept receiving more and more encouragement to keep it going. I was training with a group hosted by a local running specialty shop and running 5 or 6 days a week, every week. Running, running, running. Nothing else; no gym membership, just running.

As the time neared to run the 2008 Boston Marathon, I had everything arranged for the trip and the hay was in the barn (“hay” being a metaphor for training), and then two weeks out…

My knee started hurting when I went running one day after work. Like, a lot. This weird pain on the inside of my left kneecap just showed up out of nowhere. I hadn’t really dealt with any running injuries up to this point, just some foot pain after that first marathon that resolved on its own, so I “took time off” as other runners recommended and hoped it would go away. But “time off” was only a couple of days here and there, because I had to run – running is a good addiction to have, and for many of us it really is an addiction – and because I was afraid that doing nothing for those last two weeks would cause me to lose fitness and run a crappy marathon.

Well, in the end the loss of fitness was a moot point, but I still ran a crappy marathon and finished a full hour off of my goal time, popping Advil as I ran past the crowd at Wellesley and again at the top of Heartbreak Hill before I had to give up on re-qualifying for Boston at Boston and just walk-run the last five miles. I’m still proud to have run Boston once and to have a finish line photo to prove it, but it was bittersweet to have worked so hard only to have an injury rear its ugly head during my taper.

So, fast-forward through the next seven months of cardio machine workouts (also painful sometimes) at the gym where I broke down and got a membership, ART from a local chiropractor who specialized in treating injured athletes (I thought I might also have IT band syndrome in that knee), going to yoga classes just to be doing something that didn’t hurt (except that pigeon pose and any other deep knee bends did hurt), “stretching it out” (stretching what out???) and the pain progressing to where it hurt to walk down the hall at work and I had to regularly shut the door to my office so that I could prop up my skirted leg and ice the knee…

(Can you tell I’m not overly fond of going to the doctor?)

Finally, after a chat with a running buddy who had gone through something very similar the year before, I went to see the orthopedist/sports medicine doc who had treated her. Sure enough, my “runner’s knee” had progressed to chondromalacia. All that downhill running (which feels like dessert after running up a bunch of hills) with weak quads had basically shredded the cartilage in the area where I was feeling the pain.

There was a time when it was widely believed that there’s no way to come back from cartilage degeneration in the knees except maybe to try your luck with a graft. Well, I never had surgery (nor did the doc recommend it), but I did go through a few weeks of physical therapy at his practice followed by a few failed attempts to start running again in the first half of 2009. Finally, in the summer of 2009, more than a year after the pain had begun, I let my gym membership expire (this particular gym had an option to pay for a year all at once at a steep discount), bought some ankle weights at Target, and decided that until the knee really felt better and I could at least walk-run with a knee brace without any pain, I was just going to do some of the exercises that the doc’s physical therapist had prescribed for at home.

“Until” ended up being about six weeks. After that, I started back very gingerly by walk-running with a knee brace and dropping back to only three days a week of the PT exercises. I built up slowly, gradually phasing out the walking, until about three months into that routine when I was finally able to run 5 miles with no brace and no pain. Except for a few shorter periods of injury (which have all but stopped since I got into trail running – more on why Iove the trails here!), I’ve been back for 8 years running. Pun intended!

If you’re a runner who’s not good about cross-training, don’t kid yourself about your injuries being purely from “overuse.” There are other areas that you’re neglecting. You gotta cross-train, be that with cycling, strength training, yoga (I do and am a huge proponent of all three) or whatever doesn’t involve running. Don’t think you need a membership at a gym or any of the specialized studios, either. You can buy basic weights and home gym equipment at just about any department store and do the exercises in the evening while watching Seinfeld reruns on TBS.

So, with no further ado…

These are the simple home PT exercises that worked for me and that I highly recommend for anyone who doesn’t regularly work their quads. These can be performed just about anywhere (I’ve packed the ankle weights into my suitcase a few times for trips home to Virginia) and worked into any schedule.

When performing all of these exercises, be careful to avoid deep knee bends, generally defined as more than a 90-degree angle. Deep knee bends will pinch the cartilage, doing more harm than good.

Warm-up: 5-10 minutes on a stationary bike (or a real one if you’re not using a gym) at an easy pace with moderate resistance. Cycling is very demanding on quads and will enhance your efforts to build quad strength.

Failing those two options, go for a short walk up and down the block.

Stretch: Now that you’ve warmed up, take a few moments to stretch calf muscles, hamstrings, and iliotibial bands (by crossing one leg in front of the other and then bending the upper body sideways toward the foot crossed behind).

(Note: I have no scientific explanation, but at the time I found it more beneficial to do these things in this order and no stretching at the end. Nowadays, for most workouts I do a dynamic warm-up and deeper stretches at the end of a run or workout.) 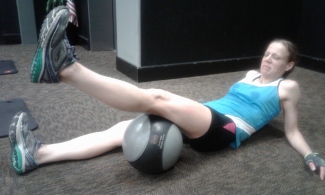 Quad extensions: With the optional ankle weight still strapped around each ankle, place a solid object under the left knee which will raise the knee to a 45- to 90-degree angle . Keeping the thigh in place, slowly lift the lower leg until the entire leg is straight or has only a slight bend. (Be careful not to lock the knee, as doing so will pinch the cartilage.) Hold for five seconds, then slowly lower the foot back to the floor, restoring the 45- to 90-degree angle  bend in the knee. Repeat on the right side. Complete 10 sets.

Wall squats: In a standing position, place your back against a wall with your legs straight and your feet on the ground about two feet in front of you. Keeping your feet firmly in place, slide your back slowly down the wall until your thighs are parallel to the floor and your knees are bent at a 90-degree angle (or slightly less). Hold for 30 seconds, then slowly slide back up to your starting position. Repeat five times.

For someone with limited quad strength, these exercises can be challenging at first, and use of body weight only is perfectly fine. Everyone has to start somewhere! As time goes on, you may become comfortable enough with these exercises to begin using ankle weights, increase your adductor lift and quad extension sets, or increase the hold time for the wall squats up to 60 seconds. Stay the course, and you will be well on your way back to normal, pain-free running!

And many thanks to the total stranger at Muv who took these pictures at my request! 🙂

Have you had any experience with runner’s knee, patellofemoral pain or chondromalacia? How did you deal with it, and what has changed for you since it all started? Let me know in the comments!

4 thoughts on “How I Bounced Back from Runner’s Knee: Exercises for Treatment and Prevention”